The beautifully written The Eagle on My Arm will make you rethink the interconnectivity and harmony that is possible between man and nature... 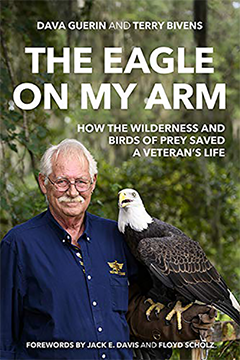 Buy it on: Amazon | Barnes & Noble

Published by University Press of Kentucky as part of the Association of the United States Army Book Program.

The Eagle on My Arm

How the Wilderness and Birds of Prey Saved a Veteran's Life

University Press of Kentucky, 2020; Association of the United States Army

In October 1967, eighteen-year-old Patrick Bradley enlisted in the US Army and was later deployed to North Vietnam as a special operator with missions to kill high-value targets. Combat left him physically and psychologically wounded, as it does many veterans, and Bradley struggled to adjust when he returned home. He seemed destined for military prison after an altercation in which he broke a superior officer's jaw, but his life changed forever when a psychiatrist recommended a unique path for healing.

Thanks to a program sponsored by the Canadian government, Bradley traveled to Canada to study bald eagles and document their behavior. He found himself recovering while living alone in the wild with minimal supplies or human contact. At the same time, his work was paving the way for groundbreaking research, including the discovery of a link between the use of the pesticide DDT and a decrease in southern bald eagle populations. Later, he forged a successful career training and managing wild animals and committed himself to helping other wounded warriors by cofounding the Avian Veteran Alliance, a nonprofit that pairs veterans suffering from PTSD and physical injuries with injured birds of prey.

The Eagle on My Arm tells Bradley's inspirational story for the first time. This moving account reveals how a soldier became a dedicated healer, using his years of study and solitude to face his demons and turn his pain into a lifelong passion for helping others.

What Others Are Saying

"The Eagle On My Arm! What an amazing and uplifting story! It has been chronicled countless times how PTSD so often severely affects individuals who encounter traumatic events in life. Dava Guerin has woven the life story of Patrick Bradley into a beautiful and fascinating one from countless difficulties and roadblocks through the redemptive and unlikeliness of encounters with nature and wildlife. Inspiring from beginning to end, each chapter was riveting and immensely readable. I simply could not put this book down!!"

"There are countless stories of overcoming your inner demons and challenges, but none quite as powerful, unique and inspiring as the journey Patrick Bradley has been on. The beautifully written The Eagle on My Arm will make you rethink the interconnectivity and harmony that is possible between man and nature, and at the same time introduce you to an unlikely hero who has changed so many lives, human and animal, for the better."

"The Eagle on My Arm shows how one wounded warrior reclaimed his life through bonding with birds of prey. In many ways, I find this book as attractive as Helen Macdonald's H Is for Hawk. Overall, the authors leave readers with a sense of admiration for Bradley and his vision. It's hard not to smile after reading the last chapter."

William E. Smith Vice president of the board of directors of Growing Veterans

"Readers will enjoy this important look at one veteran's path to finding solace and meaning after war. Bradley has helped thousands of veterans heal from the visible and invisible wounds of war, including veterans of the most recent conflicts in Iraq and Afghanistan. His story is both inspirational and educational. It is a must-read for those who want to learn about veterans' postwar struggles."

"A riveting tale of adventure interwoven with an inspiring look at the astounding power of animals and nature to help heal what's broken in us. Move over, dogs, birds of prey are here!"

"As a former US Navy Hospital Corpsman, trained as a psych tech and having served in Vietnam, and as a birder, I was moved and thankful for the work of Patrick Bradley. This unique approach to PTSD treatment has far reaching impact. We can all learn to be animal ambassadors—'just grab a bird and walk.''"

"The concept of Post-Traumatic Stress Disorder (PTSD) does not do justice to the reality of human suffering and can serve to obscure, rather than illuminate, the nature of healing and recovery. I know this first-hand. As an Army Brigade Commander, I lost two soldiers to suicide as a result of war trauma and prescription drug misdiagnosis. I stand in awe of Patrick Bradley's accomplishments and ability to affect those creatures and humans alike that have been disadvantaged. His resilience and commitment to the recovery of the injured through philanthropic efforts is a testament that people want to believe that this is the way the world can work. The Eagle on My Arm is a multi-faceted exploration of his extraordinary focus on others; a guide on how altruism needn't merely be a nice goal, but that it can become second nature, leading to a rich and fulfilling life. Giving, touching others' lives, expanding the circles of our concern to others, expressing authenticity, and being always open to receiving as well as giving; that's not just a children's fairytale―it's a good description of many of the most amazing people I've had the good fortune of meeting, including Dava and her husband, Terry. Their profound and moving book has convinced me that Patrick and his wounded compatriots would fit that bill as well."

"The Eagle on my Arm: How the Wilderness and Birds of Prey Saved a Veteran's Life is a compelling story of adventure, of resilience in the face of the trauma of war, and is a must-read for all of us animal lovers. Authors Dava Guerin and her late husband, Terry Bivens, did a masterful job of telling the life story of Patrick Bradley, an Army veteran like myself, who served his country despite many physical and emotional challenges. As with many returning military members, he suffered from PTSD but thanks to a grant where he spent three years alone in the Canadian wilderness counting bald eagles, he was healed. His career training wild animals for movies and television, and then managing numerous wounded birds of prey programs across the country, was a fun an informative literary adventure. I would highly recommend every American to read this enjoyable and inspirational book."