Years of hard work pay off in so many ways.

I am an author. 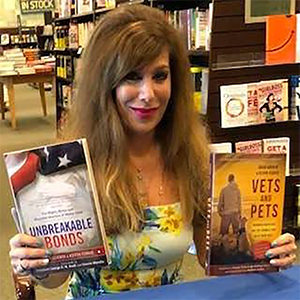 Courage, persistence, inspiration. These are just some of the words I find myself drawn to and what you'll read about in my books. I am the author and co-author of five inspiring books, with the sixth—The Eagle on My Arm (University Press of Kentucky 2020) set to be released this fall. Rebuilding Sergeant Peck: How I Put Body and Soul Back Together Again After Afghanistan (Skyhorse Publishing 2019), Vets and Pets: Wounded Warriors and the Animals That Help Them Heal (Skyhorse Publishing 2016), Unbreakable Bonds: The Mighty Moms and Wounded Warriors of Walter Reed (Skyhorse Publishing 2014), Keep Chopping Wood (Westbow Press 2016) and Presidents, Kings and Convicts: My Journey from the Tennessee Governor’s Residence to the Halls of Congress (Archway, Simon & Schuster 2016) each tell a different tale, but you will meet in each of them people of great strength of character who share their journeys of struggles, learning, growth and hope for the future. As the president of Guerin Literary Services, Inc., I help people write their memoirs and capture their unique life experiences in books that can range between one hundred to three hundred pages. In addition, I guide clients through the publishing process—from deciding whether to self-publish or submit a manuscript and book proposal to traditional publishers. For others interested in expressing their expert opinions and observations, I help them craft opinion pieces that can be submitted to their local newspapers or national media outlets. In addition to memoir writing, I have written books that have a particular theme/focus. They have included books focusing on politics, business, wellness, crime and entertainment. No matter the subject, every story can be told in an engaging format that would appeal to family and friends as well as the general public. I am also a freelance writer and my stories have appeared in many media outlets including the Philadelphia Inquirer, The Baltimore Sun, The Tennessean, The Hill, American Legion Magazine and Coastal Style Magazine, among others. I was also people editor of two regional magazines, Local Living and Bucks Living, and have written more than 30 profile stories for these two regional periodicals.

I am a communications consultant.

I am a Washington, D.C.-based communications consultant and former communications director for the U.S. Association of Former Members of Congress, a non-profit organization whose mission is to promote service, bipartisanship and dialog both in the U.S. and around the world. I was also president of Guerin Public Relations, Inc., a full-service communications firm for more than 20 years, was a profile editor of Local Living Magazine and Bucks Living Magazine and worked in senior level positions for Ketchum Public Relations and the Philadelphia Convention and Visitors Bureau. With more than twenty-five years in the marketing communications and public relations fields, I have worked with numerous U.S. Presidents and have managed visits for world leaders, U.S. politicians and entertainers. I have created and managed public relations and crisis communications programs for Fortune 100 companies and government agencies including: Comcast; H.J. Heinz; The Philadelphia Eagles; Tasty Baking Company; Comcast Metrophone; Thomas Jefferson University Hospital; The City of Philadelphia; The U.S. Congress; Schuylkill Banks; Dietz & Watson; Rohm & Haas Company; WXPN; World Café Live; the U.S. Navy, and many others. I have handled major crises, such as a mass murder; product failures; Anthrax; shootings; changes in leadership; employee issues; and potential terrorist situations, among many others. In those roles, I created crisis communications plans, trained spokespeople and their teams in crisis procedures, wrote talking points, press releases and all relevant communications and served as a spokesperson, when needed.

I continue to support the late Former First Lady Barbara Bush’s foundation, the Barbara Bush Foundation for Family Literacy as well as The George & Barbara Bush Foundation. I have also managed communications and logistics for many national and international events, as well as provided media credentialing and communications for the 2000 Republican National Convention and others, such as: The President’s Summit for America’s Future; The Bicentennial of the U.S. Constitution called We the People 200; the Congressional Medal of Honor Society; LIVE8; The Philadelphia Liberty Medal; Welcome America; Photo of the Century; Mrs. Bush’s Storytime; and others. I was also editor of the 2000 Republican National Convention’s Official Delegate and Media Guide and her op-ed columns have appeared in the Philadelphia Inquirer, The Tennessean, The Philadelphia Daily News and others.

I am an advocate and public speaker.

I am passionate about advocating for wounded warriors, veterans and their caregivers. As they return home from their military service, they often feel isolated and alone. My goal is to educate the public what they can do to help our nation's heroes and help them to use their superior military skills in their civilian careers. In addition, based on my personal experiences I also speak to audiences about all of the themes in my books as well as my personal experiences with violence and suicide.